At the end of 2014, Brande Hojskole opened a new building containing classrooms and dormitories for its students, as well as a large auditorium. For the latter, the high school commissioned Ascon to design and install a sound reinforcement system.

“Everybody wants a system that offers superb sound quality. But in the case of Brande Hojskole, the requirements didn’t stop there,” recalls Freddy Korsgaard, Sales Manager at Ascon, the company commissioned with the design and installation of the system. “The demands of the architect required speakers that would harmonize with the aesthetics of the building and that could be recessed into the ceiling. We chose the D8 because of its unique combination of size, sound quality and unobtrusive white design. Mechanically robust, the D8 is versatile and offers great coverage despite its very compact dimensions.”

And it was these dimensions – together with its white coating – that convinced the high school. Freddy Korsgaard: “Between the ceiling panels and the actual ceiling, only a limited amount of space is available. Thanks to its compact dimensions, the D8 fits wonderfully. And, with a weight of less than nine kilograms, the speaker is also incredibly light – an important feature when integrating a speaker into the ceiling.”

Driving the 15 D8 speakers installed around the auditorium are three Dynacord DSA 8206 power amps with a very high, stable output. Two Dynacord AXM 12A monitors and a wireless microphone system from Electro-Voice complete the installation, along with a motorized projector and screen.

“We don’t leave until we are 100 percent sure the installation is complete, the sound optimized and the customer happy. In the case of the Brande Hojskole, the result isn’t just good, it’s perfect!” comments Korsgaard.

Located in the central area of the Jutland peninsula in Western Denmark, Brande Hojskole has occupied a special place in the Danish education system since 1993. Placing a special emphasis on the personal, cultural and linguistic development of each student, the high school additionally stresses the use of modern technologies and equipment in its daily work. 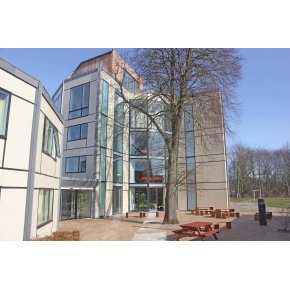 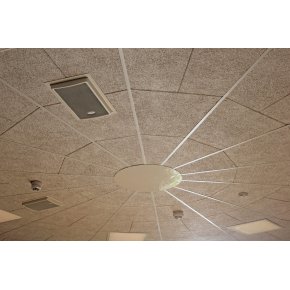 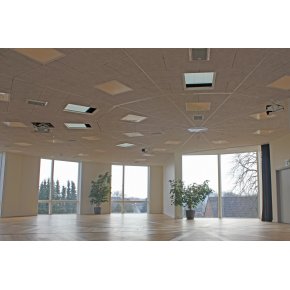